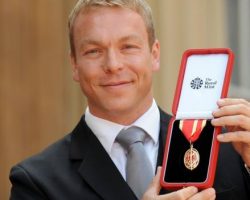 Andy Murray and Mo Farah have said that they want to be referred to by the same name as they were before they were knighted in the Queen’s New Year Honours list. Andy has even gone as far as asking the BBC not to refer to him as Sir. Completely understandable, as is the fact that Andy Murray had to think long and hard about whether he wanted to become the youngest man to be knighted. The 28-year-old, in the end decided that he would accept the honour. I understand the considerations that Andy needed to make. I have always had a concern about current elite athletes being knighted. By elite, I mean those still competing at World / International level (not an age grade). They set a precedent when they knighted Chris Hoy after the Beijing Olympics. Yes, he had become the greatest Male British Olympian (at the time) and deserved recognition, but as he was still at his peak, the knighthood should have waited until the end of his career. This also goes for Bradley Wiggins. Thoroughly deserved, but not when he still have 4 years of elite cycling ahead of him.

The honours system (no matter what people may think of) for athletes, should use the lower awards, OBE, MBE, CBE until that athlete has retired, and it is then that they should be rewarded with the knighthood. This is what happened for one of the first sporting knighthood. When Steve Redgrave was made a Sir, it was in the New Year’s honours list the year following his record breaking achievement. The same goes for Nick Faldo, who was knighted in 2009, after he was no longer on a major golf tour. With the prevalence of sporting knighthoods, the honours system is becoming a victim of the success that UK sport are having. Now that Jason Kenny has equalled Sir Chris Hoy’s record of gold medal, how long until he is knighted, and he is still only 28, and potentially has two more Olympics to compete in!

When you compare the recipients in other industries, they receive their recognition later in their careers. Alan Sugar, Elton John and Paul McCartney were knighted in their 50’s and David Jason in his 60’s, when they had been in their profession for at least 3 decades. With sport being a short career, waiting until the athlete to retire would not be to long to wait, especially as Andy and Mo, who are still currently at the top of their powers said, don’t call me sir.