While watching the Champion’s League games last week, I was surprised to see the position of the ‘extra’ official who was located behind the goal line. Since the extra official…

Whats the Point of Behind Goal Officials

While watching the Champion’s League games last week, I was surprised to see the position of the ‘extra’ official who was located behind the goal line. Since the extra official was introduced in trial form in 2009, I hadn’t realised the position that they take.

I fully understand the reasoning for using them, but I couldn’t believe the position that they were standing. It shows my lack of knowledge (or the difference with what I would have thought was common sense), that I would have expected the official to be based on the opposite side of the penalty area to the assistant referee (linesman). But that is not the case. The position taken by the extra officials is on the goal line on the same side as the assistant referee! 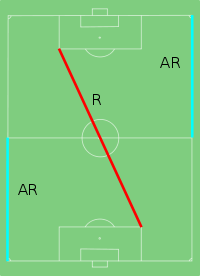 I fully understand that the referee has the main responsibility for the laws of the game, but if you are going to add another couple of officials, would it not be better to be spread around the pitch. If there is a decision to be made at the edge of the penalty area opposite where the assistants were standing, the referee would not be helped compared to previously. If a counter attack occurs, the assistant referee would be up with play on the right side of the attack, and if the ball is on the right side, so will be the goal line official. If the attack is the left side, the extra goal official would still be a distance away and potentially have the goal and nets impeding their view, so making decision making harder.

I know that I am not a qualified referee or involved in the making of the laws, but I just find it strange, that they have added extra officials to help (a step that I fully agree with), but don’t utilise them (in my opinion) in the correct area. If they were on the other side of the goal, it would assist the referee in the quadrant that they have least help in. Especially as they are looking for decisions in the penalty area, ensuring that correct decisions are made.

At least they are attempting to improve decision making.

Just like are attempting to do with the use of Video Assistant Referee (VAR). This has not been the success that the FA had hoped for, with much debate taking place about whether the decisions made by the VAR were correct. Now the decision has been made that VAR is going to be used at the World Cup in Russia in the Summer, I hope that the guidelines for its use are very specific (similar to the initial use of TMO in rugby), or it could create more controversy than it clears up. But that discussion is for another time.