With the introduction of South Africa teams last year, and now the new television deal, which will have every game each weekend being shown live. This is new dawn for… 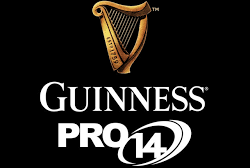 With the introduction of South Africa teams last year, and now the new television deal, which will have every game each weekend being shown live. This is new dawn for the Guinness Pro-14 Championship. I feel that this is a major step forward for the Championship and will give the league much more credence on the world stage. It was previously thought of as a second-rate competition compared to the English Premiership and French Top-14, but with the inclusion of the South African teams last year and the changes to the qualification for European competition, it has made itself a top-level competition and arguably the best (most exciting) in the Northern Hemisphere. With the Play Offs this year having four of the five countries represented and having three representatives in the Champions Cup SFs and three in the Challenge Cup QFs, the league is going from strength to strength and the fact they have got a sole TV provider in the UK which has committed to making Pro-14 the centrepiece of the portfolio will only increase their exposure.

I’ll be honest, when the new TV deal with Premier Sports and FreeSports was initially announced in March, I was sceptical about the exclusive UK rights being given to a channel that was a newish player in the market. Following the demise of Setanta Uk and ITV digital when they tried to entered the sports right market, I feared the choice of provider may come back to bite the Pro-14. However, having seen the plans, I am much more positive about the future of the championship. Premier Sports and FreeSports have shown a commitment to sports having combined with NGBs to cover their events. They have also shown a commitment to rugby, by showing British Universities and Colleges Sport Super Rugby series. I see this could be a very positive combination going forward.

Looking at the details the competition will have increased integrity, with Television Match Official (TMO) being at every match. This has long been a bugbear of mine. If a TMO is available for one game, it should be available in all. Any contentious decision, no matter which game it is in in a competition, should be reviewed, not just because that game has been selected for TV.

With Premier Sports using the Pro-14 as its flagship event, I can now see many benefits for both parties. Along with their sister station Free Sports, there will be one match each weekend shown on Free to View television. The plan is to show a ‘Showcase’ fixture on this medium, this will help with the development of the league and allow exposure (though not as much as when BBC had rights to games) to non-rugby aficionados. They will also provide highlights and discussion shows, which are similar to those provided by BT Sport in their coverage of the Aviva Premiership. The three-year deal will also give an increased revenue to all clubs and will hopefully allow them to get some more marquee signings from the Southern Hemisphere, as most appear to be going to England and France. It will also allow the teams to be able to bring in a greater strength in depth, so they may be able to rest some of their key players more often.

I am sure that the English Premiership clubs will not be happy with the increased money coming to the Celtic Nations. The English clubs were successful in changing the criteria for the European competitions (correctly in my eyes), so that it is based on complete meritocracy. Prior to this, the feeling was that the Celtic nations couldn’t rest players during the season in preparation for the European matches. This has had an effect, but not to the level that they had hoped as the Celtic nations have had more success than their English counterparts. By making the selection criteria more stringent, competition has increased and subsequently made the teams have become more battle hardened.

The change in format to two conferences has improved the product as teams appear to be playing more open rugby when the matches are against the other conference.

I genuinely feel that this is a very positive step for the Pro-14 and will allow it to flourish into to the best competition in the Northern Hemisphere.

With all the coverage being in one place, I think I will be subscribing the £10 a month (or £99 annually), just as long as the wife doesn’t find out! I just now need to decide which TV I should get it attached to as it isn’t included in multi-room.